May 25 Posted by Sharon Carroll in Behavior Science

The emotion of fear, and the associated fear response, are both completely normal components of any healthy animal. All dogs will show a fear response at some point in their life. It is particularly common to see fear responses in puppies and young dogs, as they learn about novel objects and situations.

A true fear response is a response focused on one or more specific and present stimuli. 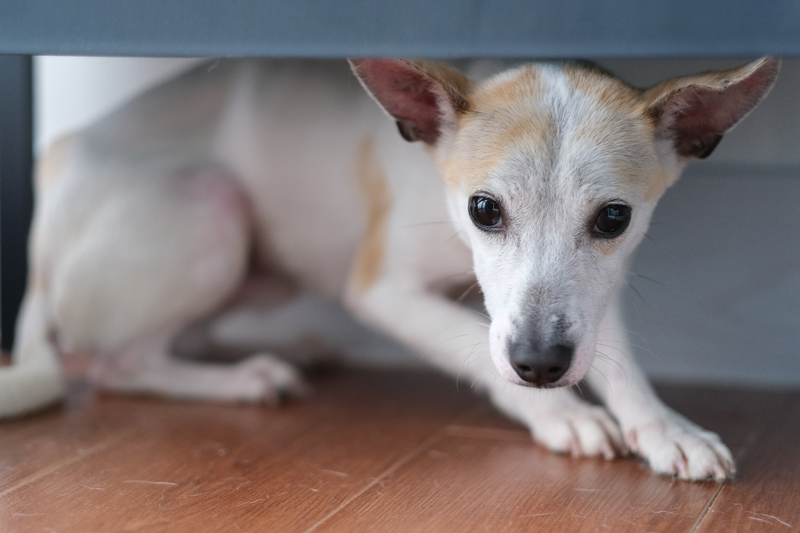 Often there will be a startle response when the stimulus is first noticed, followed by ambivalent behaviors (i.e. approach and retreat), and/or defensive behaviors (e.g. growling, barking, lunging), and/or avoidance / escape behaviors (e.g. withdrawal, running away, hiding).

In most situations the response is very brief, but autonomic responses such as trembling, panting, dilated pupils, and increased heart rate may also be evident if the response is prolonged or intense. The dog's posture and movement will typically exhibit at least a few of the classic fear signals, such as crouching, cautious approaches, weight shifting, tail down, ears back, tense muscles and being primed to retreat if needed. Eye focus may be fixed on the stimulus, or the eyes may be actively avoiding direct focus on the stimulus. The dog's exact posture and response (preparing to fight, preparing to flee, and/or exhibiting periods of freezing) will be determined by genetics, temperament, and prior life experience. It will be heavily influenced by the dog's perception as to the extent of the potential threat, and for novel items, this is influenced by the dog's innate confidence and optimism.

It is important to note that many of the fear signals often described in dogs are not specific to fear. Similar postures and behaviors are also seen in response to scanning for potential threat.

The response to a potential threat, as opposed to a present threat, is more technically described as anxiety. When watching an anxiety-related response we may also see hypervigilance, scanning of the environment, slow or stalled movement, and intermittent brief, or prolonged, freezing behaviors.

Innate fear responses are triggered in all species by a variety of stimuli. There will be some variation from species to species, and even within sub populations of the one species (e.g. breeds).

Examples of triggers for innate fear include: predators, other individuals behaving in an aggressive manner, pain, and inherently dangerous features of the environment (e.g. heights, loud noises, etc.).

Importantly, there is no learning process involved in the innate fear response. These types of stimuli induce a fear response without depending on the experience of direct harm associated with the threat, in this way innate fear allows an individual to avoid harm without having to experience it.

After a fear-inducing event occurs, a memory is formed. The purpose of this memory, along with the other changes induced in the brain, is to decrease the possibility of re-encountering the same threat again, and to assist the individual so they can better cope if a similar event does occur in the future.

This is achieved by the brain associating predictors (specific stimuli or certain situations) with the fear-inducing event. Further understanding of conditioned fear, can help to explain why it can be so difficult to reduce or extinguish a conditioned fear response once it is established in our dogs.

Acquisition and Expression of a Conditioned Fear Response

Many experiments in animals, including humans, have demonstrated that a neutral stimulus (e.g. a sound, a flashing light, even a fluffy toy) can elicit a fear response after a period of conditioning. This is achieved through pairing the initially neutral stimulus with something aversive (e.g. a mild electric shock, an incredibly aversive taste, a sudden loud noise).

If the pairing is undertaken in the correct order, with little delay, and extremely consistently, then the previously neutral stimulus now elicits a physical and emotional response similar to the aversive itself. This is then termed a conditioned fear response.

Furthermore, when an individual experiences an aversive in a certain context, subsequent re-exposure to that context can cause the same response as the aversive itself. Hence, the conditioned fear response does not have to be linked to a single stimulus (e.g. a sound, a light, an object, etc.). This type of fear conditioning is known as contextual fear conditioning.

Fear conditioning often occurs inadvertently in our dogs. One or more initially neutral stimuli (e.g. object, person, sound, circumstance, environment, etc.) are paired to something unpleasant (e.g. pain, threat to safety, loud noise, etc.), and now the mere presence of the previously neutral stimulus (now referred to as a conditioned stimulus), will elicit the same response.

If the event is significant enough, even just a single pairing can result in a conditioned fear response. For example, if a dog is attacked by another dog, and during that attack experiences pain, and feels as though its life is threatened, then the dog may later go on to exhibit a significant fear response whenever the dog notices things in the environment that were present immediately prior to, or during, that attack.

To complicate things further, there is a genetic component that renders certain individuals vulnerable to making these connections more rapidly.

Hence some individuals can experience a physical or psychological trauma and move forward without developing a conditioned fear response, or may develop a narrow or short-lived response, whereas for some individuals a seemingly small event can lead to life-long changes in their response to a multitude of stimuli or situations.

Fear extinction learning is the process we employ when we attempt to have a dog stop displaying a conditioned fear response. Fear extinction should occur when the triggering stimulus is subsequently consistently presented without the occurrence of any unpleasant / aversive stimuli.

For example, if in an experiment an individual is shown a red light, and then immediately experiences a mild electric shock. Fear conditioning has occurred when the red light alone elicits the same response as the shock. If after this conditioned fear response is established, we actively show a red light and do not administer a shock, and we do this multiple times, then the response to the red light will progressively diminish, until no fear response is evident, this is fear extinction learning.

Many people will recognize this as the goal of desensitization, or exposure therapy; consistently exposing the dog to a previously triggering stimulus whilst ensuring no bad outcome occurs for the dog. Typically, we go one step further, and employ "systematic desensitization", so the exposure intensity increases very gradually over time, and we may also incorporate counter conditioning strategies as well.

Unfortunately, there is a lot of complexity to fear extinction learning, and this is why we encounter so many issues when attempting to undertake this process with our dogs. If fear extinction learning was an absolute, then all we would need to do, is routinely expose the dog to the stimulus that elicits the fear response, but without the dog experiencing pain or threat, and after many repetitions the dog would not react at all.

It is just not that simple!

For this reason, it is extremely important that the training toward fear extinction is undertaken in as many different settings as possible and with as much variety in the environment as possible. Any single constant can form part of the context required to show the fear extinction response (i.e. dog NOT showing fear response), and with the absence of that item, person, or setting, the dog may once again show the conditioned fear response (i.e. dog showing fear response).

This phenomenon needs to be closely considered during fear extinction learning. Handlers need to ensure that the location, the surrounding people, the presence of another specific dog, their own clothing, equipment, treat pouches, etc., are all varied as much as possible across the sessions, so that the presence or absence of any one single element is not going to determine which response we see from the dog.

To make things even more complicated...

Also, when working to extinguish fear responses we must be mindful of monitoring the emotional state of the dog throughout the session. Emotional states are known to influence the way in which stimuli and events are interpreted; ambiguous stimuli will be interpreted congruent with the individual's emotional state at the time. High anxiety levels will also significantly affect the interpretation of ambiguous information. Hence if the training results in the dog being anxious, stressed or in a negative emotional state, there is an increased chance of creating further fear conditioned responses to novel stimuli or contexts.

Several phobias have been recognized in dogs. Noise sensitivity, confinement distress (equivalent to claustrophobia in humans), and some forms of separation anxiety are among the most common.

Phobias are described as an irrational fear, and often result in an extreme aversion to an object, person, activity, sensation, or situation. In a phobic scenario an individual responds as though there is a threat to their life, even though the situation is not directly life-threatening. Phobias can be among the most difficult behaviors to adjust, because the body's defense mechanism is activated, and there is little room for clear thinking. Exposure therapy, or systematic desensitization combined with counter-conditioning, are common treatment approaches.

In humans, therapies for phobias typically involve verbal discussion about the situation and the associated feelings. Progress with altering phobias can be slow. Pharmacological intervention is often required in non-human animals, as rational processing of the fear using discussion is not possible.

Dogs with PTSD display a loss of interest in objects and activities that the dog previously enjoyed, they also display a heightened startle response, hyper-vigilance and other signs associated with anxiety disorders and depressive-like disorders.

Studies have shown that individuals with PTSD have faster fear conditioning, slower fear extinction, and a reduced extinction retrieval. This further complicates our attempts to work with dogs demonstrating a fear response, but which may also be affected by PTSD.