One of my dogs has a rather unfortunate habit. Lyra comes into the house from the yard like a demented bat out of hell, with both of my other dogs after her in hot pursuit.

The results are an impressive combination of screaming, careening into walls and a generic cacophony of noise and energy that is rivaled by few. The mayhem lasts for about a minute or two, at which point the edge is off, and we go back to a more normal situation – only to be repeated the next time the dogs come in from the yard.

I have put up with this behavior for some time now. Not because I like it, but because it usually happens when I'm most vested in my work and I don't want to stop to train dogs. Since I have not addressed this issue and you get what you give, I get…bedlam.

Recently I decided I'd had enough, so I decided to solve the problem. 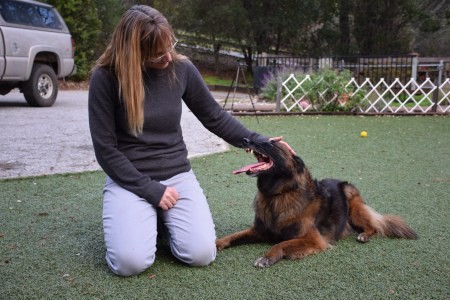 Trainer Persistence: Why You Shouldn't "Sort Of" Train a Thing

When I decide that an unpleasant behavior needs to change, then I persist until I find a solution. The reason is simple – if you go at training a behavior "sort of," "when you have time," or "when it's convenient" then you will create a variable reinforcement situation where the undesirable behavior is sometimes rewarded with what the dog wants (careening through the house) and other times the dog is expected to behave in an alternative fashion.

Variable reinforcement means that if sometimes you allow an undesirable behavior and other times you do not, then you you can end up strengthening the undesirable behavior. So my advice is…don't "sort of" train anything. Either manage behavior until you're ready to train, or train. Avoid the middle ground.

But sometimes the first solution you try won't work so well. That's ok! Dog training is not a one size fits all kind of thing. Do a bit of problem solving!

Creating a Training Plan: What Are the Options?

Lyra wants to come through the door and take off running through the house with the other dogs in hot pursuit. I want the dogs to come into the house relatively calmly. Until now I have not addressed the issue at all.

What are my options?

I can ignore Lyra's behavior.

For a variety of reasons that are not important to this blog, I've decided that allowing it to continue is no longer an option.

I can manage Lyra's behavior.

Examples would include taking Lyra by the collar or crating her when the dogs come in, and releasing her shortly thereafter. Or I could bring the dogs in one at a time to avoid the group dynamic.

Since my dogs go in and out many times a day and I have no crate in the vicinity, that type of management does not feel like a workable option for me. In addition, I'm pretty sure that when I let go of her collar or released her from a crate she'd be even more amped up, so now I'd have a new (yet closely related) issue to solve. So I think management is not an option.

I can train an incompatible behavior.

For example, I could meet the dogs at the door with cookies and redirect them to me. Because running through the house is incompatible with sitting near me and eating cookies, that is a viable starting point. Indeed, that is where I started. That worked, in the sense that the dogs quickly learned to come through the door and reorient towards me for their treats. Unfortunately, as soon as they were done eating….off they went, careening through the house again. Fail #1.

Modifying Your Training Plan: What to do When Plan A Doesn't Work Out

This time I opened the door and before any dog had a chance to get very far, I asked Raika, the oldest and most reliable dog, to "down stay" on the carpet five feet away. Then I put Lyra on a down stay next to Raika and she cooperates readily. The last dog to be asked to "down stay" is Terrier mix Brito, because he is the youngest and the least able to comply under serious excitement. But with the other two acting as role models and all of the energy gone, he cooperates nicely as well.

Now I have three dogs laying on a carpet. I go and get cookies from another room, hand each dog a snack and release them. Everyone is happy…except me, because they came out of that down stay screaming and careening through the house. Fail #2.

Clearly the problem link is the release from control to freedom, so I need to change the release itself to prevent the explosive release.

Rinse and repeat the above steps! But this time I get several cookies for each dog for their down stay and I am much slower to deliver them – indeed, they only get about one cookie per minute. We all settle in. I work on my computer in the same room. By leaving them and returning to my work, it is clear to my dogs that this is not going to be an "active" training session. They begin to relax. After a few minutes, the dogs are released from their stays AND I immediately hand each dog another cookie or even two spaced out by several seconds as they release. This final cookie step is critical, because it erases the explosive release. All of the dogs are now on their feet. They've been laying quietly for long enough that they have forgotten what they had been planning to do in the first place; namely, race through the house. And the final cookie gives them something to think about, namely, eating.

The combination of a much longer down stay and a cookie release does the trick. Training took a couple of weeks of several repetitions a day. At the end of that time, the "habit" of coming into the house like crazy dogs has diminished considerably – to the point where I now only train the behavior for maintenance a few times a week. The rest of the time they come in the house like relatively normal dogs. And there is peace.

Long Term Maintenance: How to Handle It If a Undesired Behavior Pops Back Up

But…if the dogs revert to mayhem – even one time – then I am committed to a training session. Every single time. If I cannot do that, then I won't let them in the house, or I'll put them right back out if they misbehave. That is part of training – being consistent, especially in the early training phases. In another month or so it's unlikely that I'll have to worry about it, but for now…I'm vigilant.

Total training time? Probably a few weeks and less than two hours. I have engendered cooperation, and the dogs have developed a new habit.

Really, I should have done this months ago.

Here's a training video taken after one week. I clipped out the stay parts, but left in the "entrance" and also their behavior when they were released. As you can see they are still active and busy dogs, which is fine. I'm not trying to suck out their personality or make them subdued; I just want a calm entrance to the house.

Someone probably wants to know – what happens if the dog doesn't perform the down stay?

You can't use a trained behavior in management or in training another behavior until it's solid. In this case, if I thought the Terrier Brito could not have performed the down, he would have been allowed to wander around while the other dogs performed – but he wouldn't get any cookies either. Separate from this lesson I would have worked on developing his solid stay under distraction.

Surely there are other ways this could have been addressed, but this approach worked for me. The most important points, however, remains the same. If you decide to train, then train. If not – stick to management so you don't end up inadvertently making the undesirable behavior even stronger. And when you train, be prepared to try a few options before the right one for your situation comes along.