Apr 27 Posted by Erin McNeill in Other Dog Sports

I have whippets and have been lure coursing for 17 years now. Most dogs and owners love lure coursing and the AKC's all-breed version of the sport, the Coursing Ability Test (CAT). But before you get out to your nearest CAT trial, participants should understand the risks to make an informed choice about whether the sport is right for them.

It is EXTREMELY dangerous from an injury standpoint. In fact, it is one of the most dangerous sports I do. I love it, my dogs love it and were bred for it, but people should be aware of the potential for injury before jumping in. 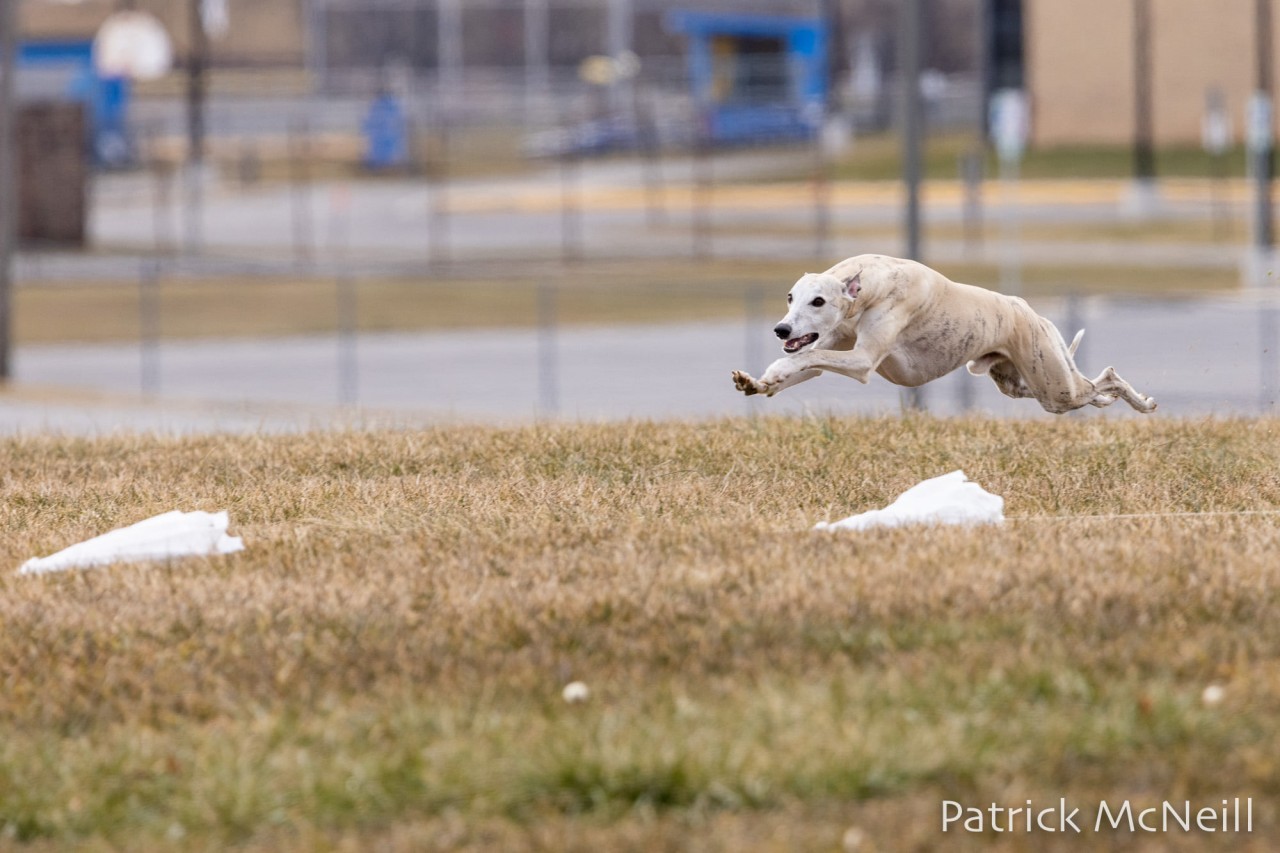 Warming Up for Lure Coursing

A couple of things to think about.

First, serious lure coursing competitors do warm up their dogs by trotting them for ten minutes before competing when possible. My dogs are often so crazy they won't trot nicely so it can be hard. A Back on Track coat can also help keep their muscles warm. I use one on days when it is cool enough that I don't think they will warm up trotting before they compete or after they run to keep them from getting stiff in the crate after they cool down. I do think many new people to the sport don't think about adequate warm up and cool down.

That is true for any physically demanding sport, though. It should also go without saying that dogs should be fit for function and carrying extra weight through those turns is asking for injury, just like it is if you play ball, frisbee, or agility with an overweight dog.

But specific to lure coursing, the turns are at top speed. This is unnatural from chasing real game. A rabbit would have to slow before making a sharp turn. A lure often speeds up to keep it ahead of dogs that cut the corner.

I look hard at the course -- turns should always be wider than 90 degrees with at least 50 yards between the turns that approach 90 degrees (90-120 maybe?), so the dog isn't doing a lot of zig zagging that can blow a CCL. I also look at how the lure operator manages the run. The lure should give enough notice to dogs that the turn is coming by being far enough out in front of them they see it and can make the turn physically.

If they blow past it and have to make a sharp turn to get back on track, that is super risky for torn muscles and ligaments.

Also watch out that the terrain allows the string to stay close to the ground. A string that comes too high will slice the dog with a "line burn" at best. At worst, they can catch a paw on it and get tangled, severing a ligament as the string wraps around a leg.

I've seen it happen on a whippet. The huntmaster should not be any random volunteer, but a person who knows how to check that the collar and leash are on properly so the dog doesn't have anything dangling that can catch on the line. They should have a knife handy to cut the line if the dog gets tangled in it. They are the last line of defense against injury. The huntmaster should be paying attention to each dog that runs, not preoccupied with getting the next person running or, worse, chatting with the other volunteers. If a dog gets tangled, the huntmaster should be ready to cut the line within seconds to prevent serious injury.

Finally, pulleys are bone breakers. A dog that runs right on the line can not only slice a toe on the string, but step on a pulley. MANY whippets I know have broken toes stepping on pulleys. Look at where the pulleys are on the course. Are they set in places the dogs are likely to run?

A tie down pulley to keep the string down on a straight away can be a MAJOR hazard and should only be placed by someone that really knows what they are doing. I know a whippet who had a terrible break of her front leg when the bag caught on the tie down pulley and she smashed into the pulley to make the "take" of the bag. Pulleys in corners are appropriate -- dogs don't turn on a dime, so they don't typically hit those pulleys. A pulley in a straight away, however, should have a cone near it to signal to the dog to run around it. The lure operator should also keep the bags far enough in front of the dog that if a bag catches on a pulley, the dog sees it and slows enough before pouncing on the bag and the pulley that they don't break their teeth or their neck coming in to make the grab.

Similarly, at the finish the lure op should stop the bags far enough from the pulleys at the finish line that there is no risk they will grab the bag and slide into the pulleys. One of my dog's littermates died when a bag caught on a pulley in a turn and she made a dive to make the "take" of the bag with the metal pulley behind it. She broke her neck.

Lure Coursing for You and Your Dog

If you have a dog who is inclined to try to make a "take" of the lure, which is, after all, proper hunting instinct for this kind of hunting, a properly fitted muzzle helps. They can't grab the lure which reduces the "slide into home base" effect. There is less risk of smashing their jaw, cutting their mouth, lips, tongue, or gums on the line, less risk of smashing into a pulley, and less strain on their neck from a sudden stop.

Often when they wear a muzzle they know they can't make the take and stop trying. I had one whippet who never made another dive at the lure again after being muzzled and it kept her much safer than her crazy antics beforehand when she ran unmuzzled and often went tumbling after grabbing a bag at 30 MPH. 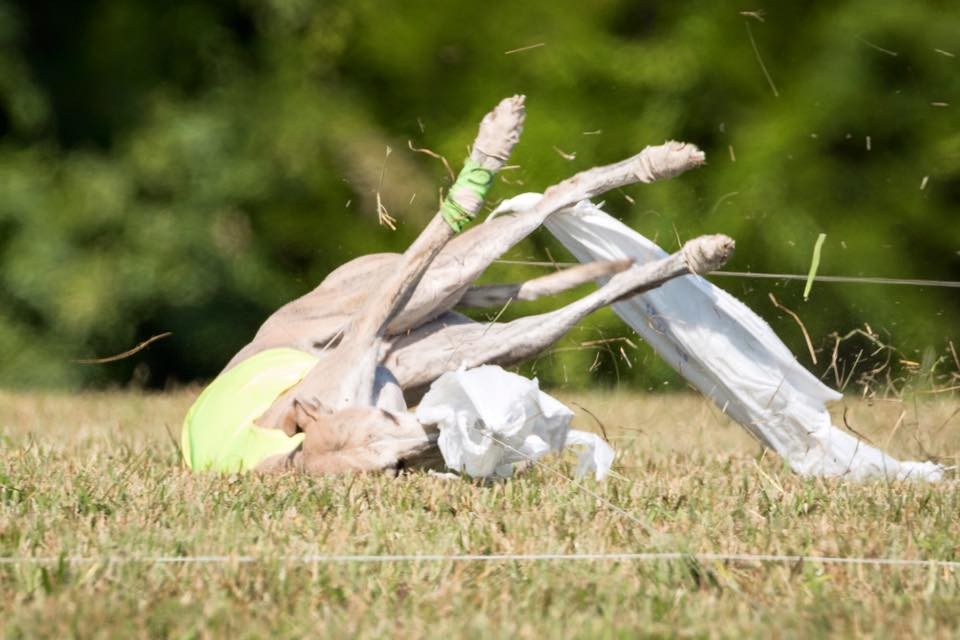 Taped stopper pads, taped paw pads (which is too advanced for this blog) and a demo of why you should muzzle your dog. Erin's dog Rhae at the finish (he was okay!). Photo credit: Patrick McNeill

You should also pay attention to ground conditions. I will run my dogs in mud because they are okay at managing the sliding. But lots of people with racing bred whippets don't. They are too fast for those conditions. Slower and lighter bodied dogs do okay in mud. Heavy and fast dogs don't. #physics.

But worse than mud, I think people are often unaware of how bad it is to run longer distances on fields that haven't seen rain in two weeks and have had hot summer sun. The ground in a lot of places gets baked to a hard clay with tough, bristled grass over it. I have definitely had torn or stretched toe ligaments running on hard baked fields that haven't had rain and even a couple avulsion fractures of the toes.

I don't run anymore unless the field has seen real rain in the week before the trial and preferably two nice weeks of regular rain. I do not run in drought conditions. The traction when stopping or turning can also take the paw pads right off a dog, especially the "stopper" pads on the carpus. When I run in hot and/or dry conditions, I wrap the carpal pad in vetwrap to protect that pad from a friction burn when sliding to a stop.

Oh and on the subject of running on hot days, I think lots of us plan for ways to cool our dogs or warm them up, but forget about the human volunteers who never drink enough to stay hydrated.

I always set my limits before the summer season and if it goes past my limits I don't go. For me and my dogs, over 89 degrees with 75 percent humidity is a hard no. At 85 degrees I look hard at conditions and it is a "probably not." My shorthaired, low body fat whippets can take it if I am careful, but it isn't fun and too dangerous to the humans, IMO, who aren't taking enough breaks or drinking enough.

But if you run your dogs, plan for how to keep them cooled off and hydrated. You might also pack a cooler of water for yourself and make sure that folks are bringing bottles of water to the volunteers, too!

So, those are all my lure coursing insights on physical risks! I hope they are helpful when planning if lure coursing is worth it or not. My dogs love it like nothing else, but there are real hazards in the sport to watch out for and mitigate as much as possible.

Note how the straight line FastCAT takes out many of these risks -- there shouldn't be pulleys where the dogs are likely to run, no worries about turns, the lure operation isn't as tricky, and it is only 100 yards, making the risk of becoming overheated a lot lower even on a hot day. If you are just doing it for fun, I think FastCAT is much safer and easier to mitigate the risks for people new to the sport.

For other teams, a dog's body type and running style matters too. How fast they are, how likely they are to try to grab the bag, and how heavy they are for their speed all makes the sport safer or more likely to cause injury.