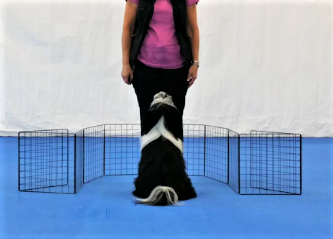 Let's talk fluency. It's something we all strive for in our behaviors. Behaviors that are fluent are consistent, dependable and reliable. They have been generalized to various location and contexts. In short, the dog has the skill and confidence in the behavior, and we can count on the dog executing it to a high degree.

We not only need to have fluent behaviors; we also need fluent cues.

I think there is! We put a lot of focus on having fluent behaviors when the most common reason a dog doesn't respond is due to a lack of understanding or fluency in the verbal cue.

How are fluent cues different from fluent behaviors? To determine whether the behavior or the verbal cue is lacking in fluency you can ask these questions:

If you answered yes to these questions, then it could be that the behavior is likely fluent, but the verbal cue is not.

Testing the Fluency of You Cues with a "Cue Fluency Check"

You can test the fluency of your verbal cues by doing a "cue fluency check". It is basically a cue discrimination exercise. In the below video, I give Kashi a series of verbal cues. Her responses tell me which cues are fluent and which she still struggles to understand fully. Her percentage of correct responses here is about 83%. And it showed me that at least one of the cues was not yet fluent.

Give it a try! Choose at least 3-5 behaviors that you feel both the behavior and the cues are fluent. They can be simple behaviors such as sit or down. While my goal is to have behaviors on verbal cue, using hand cues for the exercise is fine. Stay consistent though. If you use a hand cue with a specific behavior, then don't switch to verbal during the exercise. Remember these are behaviors you have already added a cue to and feel confident that both the behavior and the cue are fluent. The check is meant to give you information, not train a behavior or a cue.

You can set a timer for 30 sec or a minute depending on how many behaviors you have. Or you can determine a certain number of total reps – 10 is an easy one to figure out percentages.

Give your cues randomly. C/T each correct response. View your video and determine the fluence of your cues. Which need work? Which appear fluent? What is your percentage of correct responses? And most important, how will you clearly communicate to your dog the meaning of your cues to build fluency.

If you find there is latency in your dogs' response or your dog responds with an incorrect behavior, break it out. Go back to your protocol of "new cue followed by known cue" to build more value and understanding in your final cue before adding it back in to your cue fluency check exercise.

When providing cues, keep in mind that if the behavior starts to deteriorate, it might just not be the behavior that needs work.